From War Hero to Addiction Victim: Why Veterans Turn to Substance Abuse

From War Hero to Addiction Victim: Why Veterans Turn to Substance Abuse

“Some people didn’t say anything, and it just grew and grew inside of them. I wanted to let it out.” – Army National Guard Sgt. Sinque Swales, combat engineer

The announcer at a baseball game tells the excited, noisy crowd that tonight’s game is recognizing the heroic efforts of U.S. Military serviceman, John Doe. The crowd cheers, claps, and stands up for the man as he stands in front of them. Later, as he makes his way to his seat, those seated around him stand and shake his hand, thanking him for his service. They’re proud. This happens everywhere.

Thank you to those who have fought for our country. You are appreciated. Unfortunately, you have also been put up on a pedestal that doesn’t give any room for you to be recognized as human. Soldiers and veterans are thought of as tough, resilient, and unbreakable but in reality, they are people who often come back from war broken and sad. Substance abuse is common among veterans because they often feel like self-medicating is their only option to relieve their pain.

PTSD is a Substance Abuse Trigger

PTSD (posttraumatic stress disorder) is a mental disorder that some people develop after experiencing a terrifying or life-threatening event. By this definition, it’s easy to see how a military soldier can develop PTSD. They have seen things that the rest of us can’t even fully imagine.

According to the U.S. Department of Veterans Affairs:

Living with PTSD can be extremely debilitating. Symptoms of PTSD include nightmares, flashbacks, chronic negative feelings, and hyperarousal. These symptoms can occur everyday and even multiple times a day. And they can play out in ways that others don’t even notice. For example, a veteran with PTSD might not feel comfortable sitting in a restaurant with his back to everyone else. It might make him agitated and paranoid. Some PTSD victims might not want to go to a movie theater because the loud sounds parallel combat sounds in their minds.

Being limited like this in your everyday life can definitely prompt you to self-medicate with substances. Drugs and alcohol provide a temporary (but dangerous) relief from these PTSD symptoms. Think about it. When you drink alcohol, you eventually start to feel more relaxed and happy. So if you’re naturally on edge and despondent, the way you feel while drunk (or tipsy or buzzed or whatever you want to call it) can seem like a better alternative to sober life. However, substance abuse won’t cure PTSD and will just add another problem into the mix.

Female veterans are more susceptible to PTSD, which also increases the likelihood that they develop a substance abuse disorder to cope. Women are actually more likely than men to have stronger fear responses. This means that women are more likely to respond with fear when provoked, which increases the chance of developing PTSD afterward.

Women also deal with other emotional stressors in the military that contribute to the likelihood that they turn to substance abuse to cope. For example, according to a report from the Pentagon, 10% of active-duty female military members have reported being raped by another soldier. Sexual assault is a huge PTSD trigger.

When you think of combat injuries, what do you imagine? Most people will think of gunshot wounds and victims of roadside bomb explosions. While these injuries do happen often, the most common type of combat injury is musculoskeletal. Musculoskeletal injuries are movement injuries, such as strains and dislocations. These injuries can happen anywhere, whether a soldier is on the field or in training. Too much running, strains from sitting in a tank or jet for too long, or tension from carrying weapons can all lead to chronic pain as well.

The military provides physical therapy for active duty members while they are serving. However, chronic pain can still occur long after a soldier comes home. Substance abuse is often used to self-medicate for chronic pain. Alcohol and some drugs like opiates and cocaine trigger a dopamine release in the brain, which creates feelings of euphoria. Euphoria will feel good on its own, but it also masks any pain or discomfort a person was feeling before. However, as with PTSD, drugs and alcohol won’t cure chronic pain. They will only provide temporary relief. Because the relief is temporary, it can quickly turn into dependence and addiction because these victims will understandably desire that relief over their pain.

One of the main reasons behind the prevalence of addiction among veterans is that doctors are prescribing medications recklessly instead of getting these vets the treatment they actually need. Rather than giving them correct physical or psychological therapy, some VA facilities are over-prescribing opiates to “deal with” these veterans. Psychiatrist Dr. David Houlihan of the Tomah VA in Wisconsin is one example of these reckless doctors. Reports of his patients being drugged up and subdued are common. Just to give you an idea of the extent to which these veterans are being medicated, the number of oxycodone pills that Houlihan’s facility handed out grew from 50,000 in 2004 (the year before Houlihan took over) to 712,000 in 2012 even though the number of veteran patients has not increased. One young Marine Corps veteran Jason Simcakoski even overdosed and died while in Houlihan’s care. 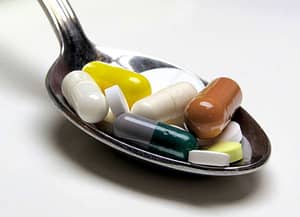 The VA explains that they’re giving out high prescription doses primarily because of the chronic pain that soldiers come home with. However, these opiate cocktails are also being prescribed to “treat” PTSD. Veterans – or anybody with physical or mental ailments for that matter – need therapy and support, not drugs upon more drugs to keep them doped up and out of it. Furthermore, these opiates are addictive. Even if veterans turn away from these rogue VA facilities and their candy lands of drugs, they are likely to have developed an addiction to their prescription medications. These soldiers who were sent off to fight for our country return to live in a constant fog of temporary medicated relief. It’s a terrible Band-Aid type of life for our war heroes.

Heavy or binge drinking is a significant part of military culture. In their down time, soldiers are likely to turn to alcohol and treat it as a pastime. The freed inhibitions that accompany alcohol can also help troops bond more easily. Heavy drinking is also seen as a manly quality. “I can pound 10 beers and still feel fine!” Impressive, right?

The Department of Defense has a zero tolerance policy on drug use. However, soldiers can still be prescribed medication, which can then be abused. That’s not to say that a lot of soldiers don’t need their medications or use them properly. But opioid misuse does still exist in the military.

As stated earlier, this idea that soldiers and veterans are tough and resilient leaves no room for them to be normal humans. Mental illness is already incredibly stigmatized in today’s culture. So the idea of our protectors and defenders developing mental illnesses is not only unbelievable but also unacceptable to the general public. Apparently strong does not allow any room for real emotion. This stigma is the primary reason why veterans don’t seek help for disorders like PTSD.

The general public also stigmatizes substance abuse and addiction. Many people who have no experience with addiction don’t see it as the disease that it is. They assume that addiction is a choice and a cop-out to not deal with real world problems. News flash: it’s not. Addiction is a disease and is affected by many things, including genetics, stress, and mental disorders.

Soldiers and veterans themselves also have a hard time accepting both mental illness and substance abuse. They often see themselves as protectors and therefore feel shame when they develop PTSD or a substance abuse disorder. Alcohol or drug dependencies especially invite feelings of depression or frustration because these men and women believe themselves to be weaker because of it.

Veterans specifically experience this shame and frustration because they feel like they made it through war and combat but now can’t make it through “real life” sober. They believe that seeking help means admitting there’s a problem, which means admitting weakness. But that’s not the case at all. Treatment will not only heal that problem, but it will also make you stronger.

These soldiers have seen things that most of us can’t even imagine. It’s not natural for someone to have countless deaths on their hands, to see living, breathing people blown off of roadsides, or to strap on a gun and run around hoping every single second that they don’t get killed. It IS natural for someone to have lingering emotional distress from this extreme lifestyle. These are our heroes who are falling victim to substance abuse because we don’t give them room to be human.

But help is out there and it can change lives. If you or someone you know is struggling with substance abuse, call us at 855-737-7363 for a free and confidential screening.