Your Obsession with the Addict’s Behavior Causes Harm

Your Obsession with the Addict’s Behavior Causes Harm 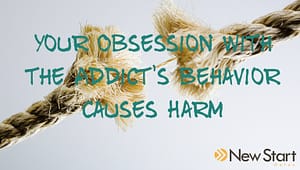 Substances abusers create devastation in their own lives and in the lives of people closest to them. They damage their health; they ruin relationships; they cause financial hardship; and they sometimes destroy opportunities for successful employment. At the same time, family members and friends create chaos of their own by obsession with the addict’s behavior. They count the number of drinks an alcoholic is having. They keep track of days absent from work.  They dwell constantly on what the addict is doing or neglecting. They try desperately to control the situation. Obsession with the addict’s behavior, although perhaps understandable, causes harm to everyone involved.

People who are troubled by someone else’s drinking or drug using often become addicted to obsession. They spend inordinate amounts of time focused on another person’s behavior, which gives them a false sense of purpose. Obsession with an addict’s behavior often causes family members to neglect their own health and wellbeing. It creates an unbalanced life by consuming time and energy focused in one direction. Family members can become ill themselves, both physically and emotionally by becoming addicted to the substance abuser’s behavior.

The solution to obsession with the addict or alcoholic is detachment. This often is a difficult concept to understand because people at first think it means abandoning the addict. Desperate family members do not want to turn their backs on their loved ones who suffer from substance abuse, but they don’t know what else to do. The answer is letting go of the problem and having compassion for the emotional issues that drive the addict’s behavior. In order to detach, family members need to practice living their own lives and allowing the addicts to live theirs. In recovery, family members will learn that they did not cause the problem and they cannot cure it. As difficult as it may be to see people you love destroy themselves with alcohol or drugs, addicts have little chance of recovering if they are prevented from suffering the consequences of their choices.