Opinions. The best and worst thing about them is that we all have our own. Unfortunately, many people use the idea of subjectivity as a defense to subvert certain truths. Using drugs as an answer to calm the symptoms of one’s psychiatric disorders is as common as it is devastating. But the choice to self-medicate with narcotics is not as selfish, or even really a choice, as some may believe. “How I deal with stress is none of your business!” is a cry heard often in the trenches of addiction. This display of individual agency often obfuscates deeper misunderstood needs, especially when it comes to people suffering with dual diagnosis. Our society wraps psychological disorders, trauma, and other treatable issues in such suffocating stigma that people who need help the most smolder in the shadow of their own self-destructive behaviors. But it doesn’t have to be this way–getting the appropriate psychiatric medication can can make all the difference in the world for people who suffer from mood disorders like depression and bipolar disorder.

The answer to this question is: it depends. Many people who enter recovery for other drugs or alcohol are surprised to learn that their psychiatrist-prescribed medications are not allowed in treatment. This is because some psych meds are actually narcotic, highly addictive, and exacerbate addictive behaviors. That said, not all psych meds are narcotic (particularly SSRIs like Zoloft, Prozac, and Lexapro).

Unfortunately for people who suffer from mental illness though, many mental health professionals prescribe addictive drugs for behaviorial/mood disorders. For instance, Xanax is a classic example of a psychiatric medication that gets prescribed for anxiety. But Xanax is actually a schedule IV benzodiazepine (often called a “benzo”, which is basically a tranquilizer) that has a high potential for abuse. Benzos, while not narcotic in the “classic” sense, induce stupors that can be more dangerous than traditional narcotics derived from opium. On the other end of the narcotic spectrum, psychiatrists can prescribe Adderall (an amphetamine) for ADHD. Here is a visual breakdown of narcotics vs psych meds: 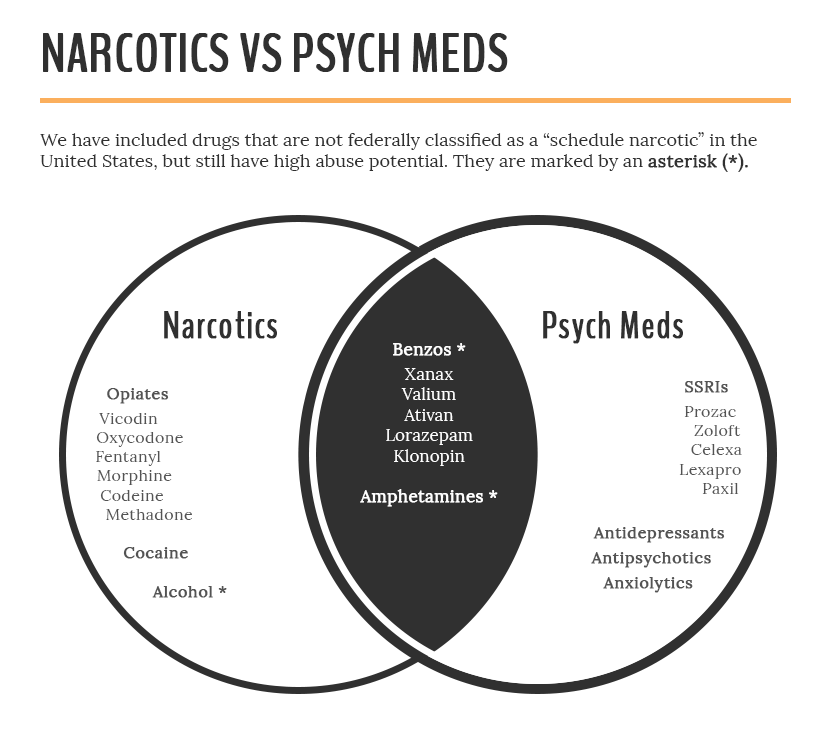 Most legal narcotics don’t apply to psychiatric use. Some opiates, for instance, get prescribed for physical pain. But even legal Rx opiates are highly addictive. The US federal government classifies narcotics into five different schedules depending on their medical use and abuse potential.

Fitting into both categories, narcotic psych meds are all controlled substances in the US (mostly schedule II and IV). Benzodiazepines (“benzos”) are a tranquilizer class used to treat symptoms like anxiety. Amphetamines are a stimulant that can be treated for ADD and ADHD.

There are plenty of psychiatric medications that are not narcotic. They don’t have high abuse potential and are much safer for treating psychiatric symptoms of addicts who suffer with dual diagnosis.

In the fog of disease, many addicts and alcoholics believe themselves to be different from the rest. That their version of self-medicating is somehow special. Statistics linking addiction and mental illness suggest that dual diagnosis is a self-perpetuating paradox; yet, the misinformation about psych medications (and resulting choice to self-medicate with narcotics) only keeps people in thrall to their disease. We are here to argue the case that addiction and mental health disorders take root in biology/neurology, not opinion, and that people with dual diagnosis benefit immensely from a better understanding of narcotics vs psych meds. A proper psychiatric diagnosis accompanied by an appropriate regimen of non-narcotic psych meds may be the only thing keeping you or your loved one from getting and staying sober.

This is one fact that many addicts are in denial about. Although most forms of self-medication are dangerous, the opioid epidemic’s soaring number of overdose deaths in particular highlight this very well. The recent Netflix documentary Heroin(e) shows how legitimate prescriptions from doctors easily form prescription drug dependence.

Unfortunately, from that point, the downward spiral is all too common. Painkiller prescriptions instill a false sense of safety. But the easy degradation from taking doctor-prescribed pain pills to scoring heroin off the streets shows just how precarious life really is when substance addiction comes into play.

Although narcotics work more immediately, they only mask symptoms of mood disorders. Proper psych meds actually address the underlying issue. The only drawback to this is that psych meds can take weeks, or even months, to really take full effect. When a person suffers from serious mood symptoms, this can seem like an impossibly long amount of time to bear. But any person suffering with a real addiction issue can attest that the alternative is infinitely worse.

Instant gratification is hard to resist. We’ve talked about the issue at length before. But there comes a certain point where the consequences outweigh the benefits. Maybe it’s feeling alone and separated from an estranged family. Maybe it’s the lack of fulfillment in your career as drug and alcohol use holds you down. Perhaps it’s a legal issue. Regardless, these mounting consequences have a silver lining: treatment options that can start your journey of long term recovery.

It Takes Responsibility Off Your Plate

Although making our own decisions gives us all a sense of independence, freedom, and control over our own fate, delegating certain decisions to experts (like a psychiatrist) hands you more control over your fate in the long term when it comes to medication needs. Suffering from a mood disorder creates a lot of chaos and uncertainty. Grappling with the responsibility of fixing your own disorder only leads to more stress.

It’s no wonder the difference between narcotics vs psych meds is so misunderstood. There isn’t great education or awareness out there for how medication is made or why it’s used. If you or a loved one is suffering from dual diagnosis, call our addiction specialists today and reach out for help: 855-737-7363