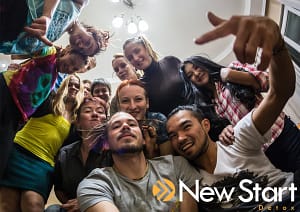 One of the primary ways in which our culture contributes to the problem of addiction is in the media’s portrayal of alcohol and drugs. This portrayal is twofold. On the one hand, popular entertainment glamorizes the use of alcohol and minimizes its consequences; on the other, the alcohol and pharmaceutical industries use mainstream media to propagate the idea that their products offer fun and freedom—freedom from stress, anxiety, and depression. The idea that a drink or a drug can fix one’s psychic pains and challenges has been instilled in our culture’s consciousness.

According to an article published by the National Center for Biotechnology Information, adolescents are heavy users of television. Eleven- to thirteen-year-olds watch an average of nearly 28 hours of broadcast and recorded programming each week and are, as a result, immersed in scenes of drinking and alcohol product placements. One analysis of primetime television showed that over 70 percent of programming involved alcohol use or a reference to alcohol. Overall, the content tended toward a positive bias regarding alcohol use.

Similarly, popular films often seem like propaganda for the liquor industry: A hero drinks expensive brandy, champagne corks fly at celebrations, and beer brands are strategically placed for prominence and effect. Numerous studies suggest that these media representations of drinking alcohol affect consumer choices and tend to promote perceptions of alcohol use as safe and minimally consequential.

Advertising is pernicious when it comes to alcohol and drugs. A tremendous amount of money is spent by the alcohol and pharmaceutical industries in order to create brand recognition for their products. We see images of depressed people suddenly transformed into cheerful and robust ones, running their dogs in the park. Pills for male sexual performance, sleep, anxiety, and a myriad of other common problems are advertised during prime time.

All of these subtle but powerful media messages tend—intentionally—to nudge us toward a quick-fix mentality: take a pill, feel better. Have a beer, be part of the party. For those among us who are predisposed toward addictive behavior, the influence of these images has no effective counterweight to help moderate consumption. As a culture, we have allowed these images to establish a norm about drug and alcohol use that may be serving us poorly.