The Five Most Addictive Drugs on the Street Today

The Five Most Addictive Drugs on the Street Today 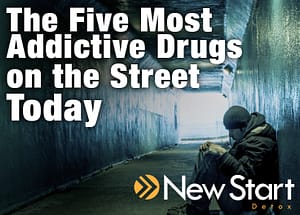 Drug and alcohol addiction is a serious problem in the United States. Among the five most addictive drugs on the street today are heroin, cocaine, methamphetamines, prescription drugs, and alcohol. This article will discuss these drugs and how they affect the mind.

Heroin produces a quick rush of euphoria after it is injected into the veins. Users of this addictive drug can go on a vicious cycle of hyperactivity followed by disorientation and drowsiness. Although many individuals use this drug to self-medicate from emotional pain, the brain is tricked into only being able to experience the artificial high that heroin can produce. Withdrawal can cause muscle and stomach cramps, vomiting, and intense diarrhea.

Cocaine is a stimulant that is normally snorted. It can cause intense euphoria because it floods the brain with dopamine. Unfortunately, cocaine use can lead to loss of smell, nosebleeds, paranoia and hallucinations. As the brain becomes conditioned to this euphoric high, cocaine users need more and more of this drug in order to get the same result. This can lead to overdose and death.

Users who get hooked on methamphetamines usually have serious depression, low self-esteem and feelings of inadequacy. Called “Meth” or “Crystal” this drug causes a feeling of euphoria when it is first used that is seriously diminished thereafter. Much like cocaine, meth users will continue to chase that high after the first use. Prolonged use can lead to severe psychosis, stark tooth decay (called “meth mouth”) and hallucinations. Users need intensive treatment in order to kick their addiction to meth.

Prescription drugs are just as addictive as street drugs and are easy to hide because they are legal. They can either act as a stimulant or a depressant depending on which type is used. Users will often “doctor shop” in order to get the fix that they need. More people die from overdoses caused by prescription drug abuse than all other drugs combined.

Alcohol stimulates the release of endorphins which lead to a feeling of well-being. This is why a lot of people use alcohol in the bar scene in order to “party.” Frequent alcohol use can cause tremors in the hands, liver and kidney damage, and long term use has been known to cause dementia.

[cta_large]Join the conversation on Facebook and tell us your thoughts about addiction.[/cta_large]