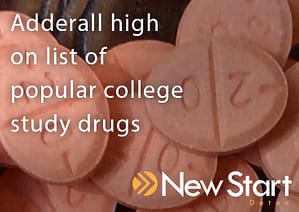 In an attempt to stay focused on the seemingly endless college workload, some students have turned to Adderall as one of several popular study drugs. Adderall, generally used to treat ADHD (attention deficit hyperactivity disorder), is a stimulant that can enhance cognitive awareness and performance. It increases certain brain activity, which can result in more motivation to perform, higher stamina and more alertness. Adderall comes in tablet form. The tablets, which can be ingested or can be crushed for snorting. The crushed tablets also can be mixed in water for injection.

Adderall and other study drugs rampant on campuses

Use of study drugs, such as Adderall, is far from uncommon on college campuses. Some surveys show that many students do not consider Adderall a dangerous drug, and most students simply ask for it from a friend for whom it may be prescribed. Students who use the drug legitimately say friends approach them frequently to ask for some of their ADHD medication. To combat the problem, some college health centers have issued suggestions and warnings for students on how to protect their prescriptions and how to turn down request from drug seekers. Even if students cannot obtain Adderall from their friends, prescriptions are easy to obtain by those who know how to manipulate false information on checklists to test need for the drug.

Misuse of Adderall is a growing problem because managing time in a hectic college schedule can be daunting. Using Adderall seems like a fast and easy solution. It is popular because students have a rather skewed belief that they can stay more focused and will be able to achieve higher test scores if they have a heightened ability to concentrate. While that may be true for a period of time, eventually Adderall use can lead to dependence and then addiction. Even though the rate of Adderall abuse has not reached the epidemic stage, the reported increase in its use is higher than for cocaine or hallucinogenic drugs in college-age demographics.

Study drugs also are called “smart drugs.” Students say they take Adderall, which they sometimes call “Addy,” particularly during final exams. Because the drug can cause sleeplessness, users can stay awake for long hours to cram for tests. The sleepless hours eventually lead to sleep deprivation, however, which can have psychological and emotional effects. Because of the ease with which students can obtain it, they seem to forget that taking the drug without a prescription is not only illegal, but, in some cases, a felony. Some students have made money by selling Adderall, also a felony, and they jack up the price during times of high demand, such as finals week.

Side effects from study drugs can be harmful

Even though students who take study drugs illegally see it as some sort of wonder drug, the side effects can be quite dangerous. First of all, they are highly addictive. Because they increase a sense of pleasure and accomplishment, they quickly create a desire for more. As with any other stimulant, users run the risk of hypertension and irregular heartbeat. Extended misuse in terms of dosage and length of time could result in extreme withdrawal symptoms, including hallucinations, seizures and depression. Some studies show that Adderall abusers may have suicidal thoughts, and others show tendencies toward violence and hostility. http://www.cchrint.org/psychiatric-drugs/stimulantsideeffects/