My body has been viscerally seized by the news of a suicide twice in my life. The first was a Thursday almost twenty years ago on May 6th, 1999, when I was nine years old learning that I would never see my father again. The second was this Thursday, July 20, 2017, when Chester Bennington died. 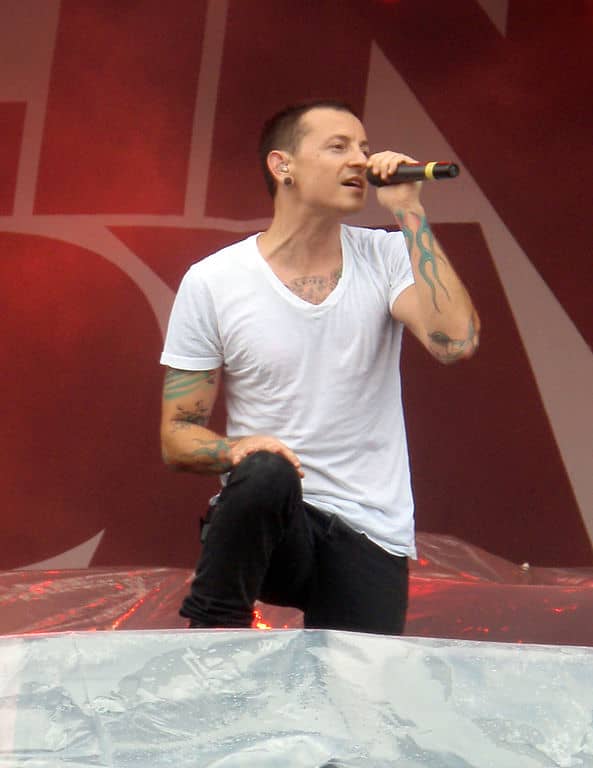 These two men, although they never met, were alike in many ways. They both struggled with the demons born from trauma and depression, tried drugs and alcohol as a way of suffocating those demons, convinced most people that other, healthier coping mechanisms were working…

But before reaching the age of 50, both men silenced their demons forever with a more final solution. It’s a tragic story that, thankfully, not all addicts suffering with depression need succumb to.

There is Meaning in the Wake of Suicide

By now, we’ve all heard the public decries of sympathy. It’s common to hear sentiments like,

“Man, depression is no joke.”

“Addiction is such a serious problem.”

“His lyrics really made me feel understood when I was young.”

But for people suffering with addiction and depression, the comforting resonance doesn’t fade with age. Familiar sentiments of loneliness, fear of your own mind, and the desire for inner quietude become symphonies. They act as reminders that we can step back, identify unhealthy thought patterns, and take things one day at a time. Speaking as a recovering alcoholic with chronic depression and more than my fair share of trauma history, I can faithfully say that Linkin Park’s discography has played a huge part in my recovery over the years through relapse prevention.

Chester’s letter to Chris Cornell pays tribute to that. It’s tempting to despair that Chester’s suicide at 41 years old was premeditated. I’ve grappled with that fact in regard to my own father (who took his life at 49) for almost 20 years now. It was only after I learned that Chester had six children that the tears really started to flow. I wouldn’t wish those years of lost, confused suffering my brother and I went through on any other child, much less six of them.

But people with dual diagnosis need to remember one main thing: It’s okay to feel sad that he didn’t make it, but despairing at the “futility” of Chester’s suffering is a dishonor to his memory. As the child of a bipolar suicide victim, it took me a long time to forgive my dad for leaving, but I found peace by remembering what he did to make me feel special and wanted while he was still alive. Chester did the same thing for all of us. I could blab on for a long time about the ways I idolize, and will continue to celebrate, both of these men who suffered with mental illness and addiction. Only people with experience in both areas could appreciate, firsthand, the deeply personal lyrics that Chester shared with millions around the world. Like many other Linkin Park fans, I held his words close in times of need. Linkin Park’s music is cathartic in its ability to process complex emotions.

We all know what it’s like to feel bad. But not everyone understands what it’s like to smoulder in the long shadow of their past. Many addicts, however, are all too familiar with this pain. I still fantasize about the way alcohol so effectively pulled the plug on my mind’s inner monologue. Similarly, Chester was very open about how being molested as a child drove his history of drug abuse.

It’s easy to (1) judge addicts and suicide victims as weak-minded or (2) throw up your hands and say, “I just don’t understand why they do it.” Empathy, on the other hand, takes a real amount of courage, and it’s one of the things that makes humanity beautiful. If you’re still reading this far trying to process Chester’s suicide, you’re one of the reasons I’m not a cynic.

When sadness becomes too much to bear, many of us turn to friends and family to feel better. Similarly, when we see a loved one consumed by sadness, our first instinct is to say, “I’m here for you if you need to talk.” So why would a person with so many resources (family, friends, professional therapy, mood medications, and even drugs/alcohol) turn to suicide when there is so much else to live for? Both Chester and my dad had friends and family who loved them, and they were intelligent, talented men. But whether you’re the lead singer of an internationally famous band or a more modest suburban dad working in the Long Beach harbor, sometimes, the thoughts become too loud to handle. They drown out all sense, logic, empathy, or love that another person could ever offer. That millions of screaming fans could ever offer. That a daughter who loves you more than the world itself could ever offer.

Drugs and alcohol, on the other hand, are more immediate silencers. That’s why there’s such a huge link between addiction and suicide. Both serve a similar immediate function for chronic sufferers who need some peace and quiet. The link is proven by statistics:

But for people with dual diagnosis considering a more final solution, it’s crucial to understand that you’re not alone and help is out there. You don’t have to resign yourself to either (1) feeling too shitty to function or (2) too numb to feel shitty. Drugs and alcohol are only band-aids for a problem that cuts much deeper, and frankly, they only exacerbate the problem and make it fester while you’re too numb to notice.

Although most don’t understand the burden of people who suffer with addiction and a mood disorder, there are many who have experienced it firsthand and came out the other side. These success stories can usually be attributed to the help of professional treatment programs and non-narcotic mood medication. Music is also a big part of sober maintenance, and many recovery programs offer music therapy like Rock to Recovery as a way for recovering addicts and alcoholics to make meaning in sobriety (including ours).

I never met Chester personally. But his story speaks to bigger, more human pain that, tragically, remains in the shadow of stigma. LP’s last album is a testament to that.

Chester Turned His Scars Into Stories

Linkin Park, like any living, breathing thing, evolved over its lifetime. Fans have mixed feelings about their transition into pop music. But in the end, the evolution of LP’s music reflected Chester’s emotional maturation as a recovering addict and human being. Say what you will about the subjective differences between pop and alternative rock, but the 2017 album One More Light acts as a beacon of hope to dual diagnosis addicts who remain consumed in the throes of 2000’s Hybrid Theory and 2003’s Meteora. Look at these lyrics to see how Linkin Park’s message evolved from suffering in the trenches of addiction and depression to a plane of heightened awareness and self-acceptance.

For many people who contemplate suicide, the battle is more of a subtle, yet excruciating lifelong war. Chester talks about this war in the clip shown above. The final silence of death can beckon as an “answer” to the desperation that comes with feeling overwhelmed by dark thoughts on a consistent basis. Unforgiving, chronic self-hatred has as way of making us feel hopelessly alone. But romanticizing suicide is a mistake. If you or someone you love needs an immediate reminder of that, the suicide hotline at 800-273-8255 is available 24/7 to offer help.

Breaking the Habit: Get Help Before It’s Too Late

Chester’s suicide does not negate the positive progress that me made in those intermediary years. But it does highlight one urgent message. People with dual diagnosis are never entirely in the clear. Addiction and depression are insidious in the way they can creep back into your life. There’s a reason the saying in recovery is “working a program” rather than “graduating from rehab.”

As outsiders, we may never know the details of Chester’s personal struggle that led to his suicide. Dual diagnosis is a complex, highly individualized problem. But we can all take a cue from his story and reach out for help when it’s needed. Don’t give power to mental illness by becoming numb through whatever your drug of choice may be. If you’re struggling with substance abuse or hope to provide resources for a loved one, here are some ways to get help.

If you or a loved one is ready to get help for addiction, reach out to New Start Recovery’s counselors at 855-737-7363. We are available to talk and discuss treatment options any time.