Imagine being 30 years old but looking and feeling like you’re 70. Your driver’s license says 30 but when you look in the mirror you see wrinkles, balding, and red spots. Your skin lacks color, your hair lacks luster, and your mouth is worthy of dentures. This is the reality of substance abuse. Drug and alcohol abuse are dangerous on their own for reasons like addiction, overdose, and mental disorders. However, they also attack your physical appearance and can push an addict through premature aging.

Substances that Cause Premature Aging:

Have you ever seen those side-by-side mug shots of drug users? They’re used to showcase the extreme deterioration that drugs do to your body in attempt to scare people away from using them. The biggest thing that these mug shots show is the extreme premature aging that meth has pushed the addict through. Meth addicts look like they’ve aged years or even decades within a span of a few months.

Meth causes the body’s tissues and blood vessels to deteriorate. Those tissues and blood vessels are crucial to the body’s ability to naturally repair itself. Think about how your body grows a scab over a cut. What happens underneath that scab? The skin is healing itself. That’s why you have fresh new skin when the scab falls off. Meth hinders that process. Instead of healing itself, the skin will carry scars, dark spots, red spots, and a variety of other skin hiccups that we normally associate with old age. Furthermore, the hindrance will ultimately take away the skin’s elasticity and luster. Instead of firm, bright skin, meth will leave you with wrinkles and a dull greyish appearance. 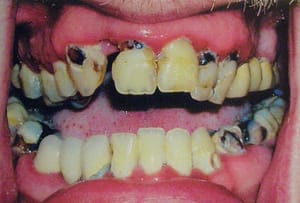 Your skin is not the only thing meth will target. Have you every heard of meth mouth? “Meth mouth” is the unfortunate nickname given to the rapid dental decay that accompanies meth addiction. Your mouth has salivary glands that produce the saliva that protects your tooth enamel from mouth acids. Meth causes those salivary glands to dry out, which leaves your enamel unprotected. But it’s not just normal mouth acids that attack your enamel. Meth contains caustic materials that quickly break down tooth enamel when smoked. Once this process begins, there’s not much you can do to stop it. Prolonged meth abuse will quickly rot your whole mouth from tooth to gums to bone.

We all know that we’re supposed to drink water while we drink alcohol (even though a small percentage of drinkers actually abide by that rule). Drinking water keeps you hydrated while you’re drinking alcohol because believe it or not, alcohol dehydrates your body. Alcohol decreases your body’s production of anti-diuretic hormone, which is used to reabsorb water. So your body gets dehydrated when you drink alcohol. Continued alcohol abuse means continued dehydration. We’re not just talking about the dreaded hangover anymore. Constant dehydration will take quite a toll on your body. And what’s worse? Dehydration isn’t the only thing you have to worry about with alcohol. Alcohol also depletes the body of certain nutrients, causing deficiencies throughout the body.

So, let’s name some things that we associate with old age. There’s dry, brittle hair and hair loss. We also see wrinkles and blotchy skin. Now let’s look at the alcoholic. The constant dehydration caused by chronic alcohol abuse will become physically apparent in an alcoholic’s skin and hair. Alcohol abuse will cause hair to become dry, brittle, and broken. It will also strip your skin of natural moisture, causing wrinkles.

Now let’s add the nutrient deficiencies. Alcohol can trigger a zinc deficiency, which can cause your hair to fall out. Alcohol addiction will also create a vitamin A deficiency in your body. Vitamin A plays a huge part in skin renewal through the production of collagen. It’s crucial to your skin’s elasticity and regeneration. A vitamin A deficiency is basically a welcome sign for wrinkles. And finally, alcohol will attack skin tone. Alcohol can trigger rosacea, a skin condition that causes a red, rash-like appearance on the face. Constant triggering can cause blood vessels to burst and mark the face.

So, we’ve now basically described the physical features we negatively associate with old age by describing an alcoholic. The moral of the story is that you don’t need to be in your 80s or 90s to look like this. Alcohol will do the job for you and push you through premature aging.

Heroin, Crack, and Other Drugs that Can Be Smoked

Drugs carry dangers on their own. But the process of smoking those drugs actually adds to those dangers. There are many harmful effects of smoking but we’re focused on one in particular. Yep, you guessed it! Smoking drugs pushes an addict into premature aging. Smoking adds dangerous carcinogens and toxins to drug use through the process of combustion. The toxins in smoke attack skin cells and hair follicles. Skin will start to sag or sink in, which will be especially apparent in the face and lips. The damaged hair follicles will lead to hair loss. The damaged skin cells will also affect the skin’s ability to renew itself because of a lack of collagen and elasticity. Wrinkles, creases, and eczema are the result. Again, drugs like heroin and crack are dangerous as they are. But the common process of smoking these drugs is the primary culprit of premature aging. 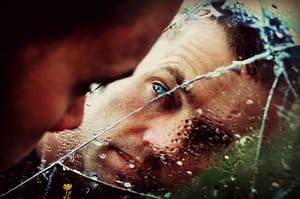 Your driver’s license doesn’t lie but neither does the mirror. Substance abuse will wreak havoc on your physical youth. However, premature aging is not the worst consequence of addiction. Substance abuse and addiction can cause internal physical health problems as well as mental issues, overdose, and death. These health issues are incredibly hard to heal once they’ve got a grasp on your body. The best thing to do is to seek help before the harm goes too far.

If you or someone you know is struggling with addiction, don’t hesitate to seek help! New Start offers treatment for both drug addiction and alcoholism. Call our staff at 855-737-7363 for a free and confidential assessment.