Sublocade is a monthly injection of buprenorphine used to treat opioid use disorder.

Text or call us for a free consultation today.

Talk to a Counselor

How Does Sublocade Work?

SUBLOCADE continuously releases buprenorphine all month with no real daily ups and downs.

The SUBLOCADE (buprenorphine extended-release) injection, for subcutaneous use (CIII) is indicated for the treatment of moderate to severe opioid use disorder in patients who have initiated treatment with a buprenorphine-containing product, followed by dose adjustment for a minimum of 7 days. 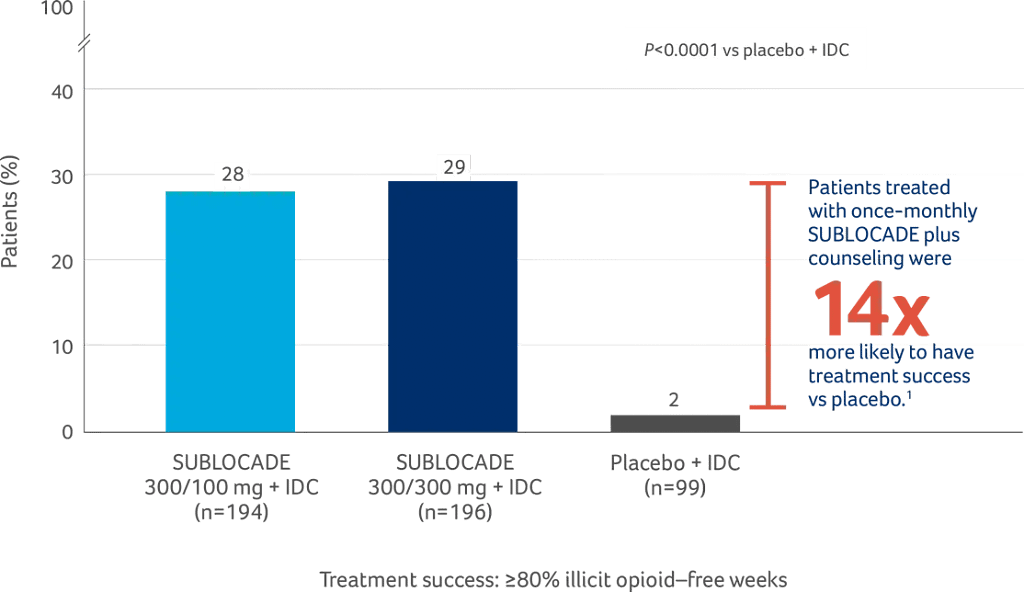 SUBLOCADE helped patients overcome the drivers of addiction, which may also have helped them focus on other aspects of their recovery

“New Start helped make me feel comfortable and safe during the detox process. The medications made the process easy.” 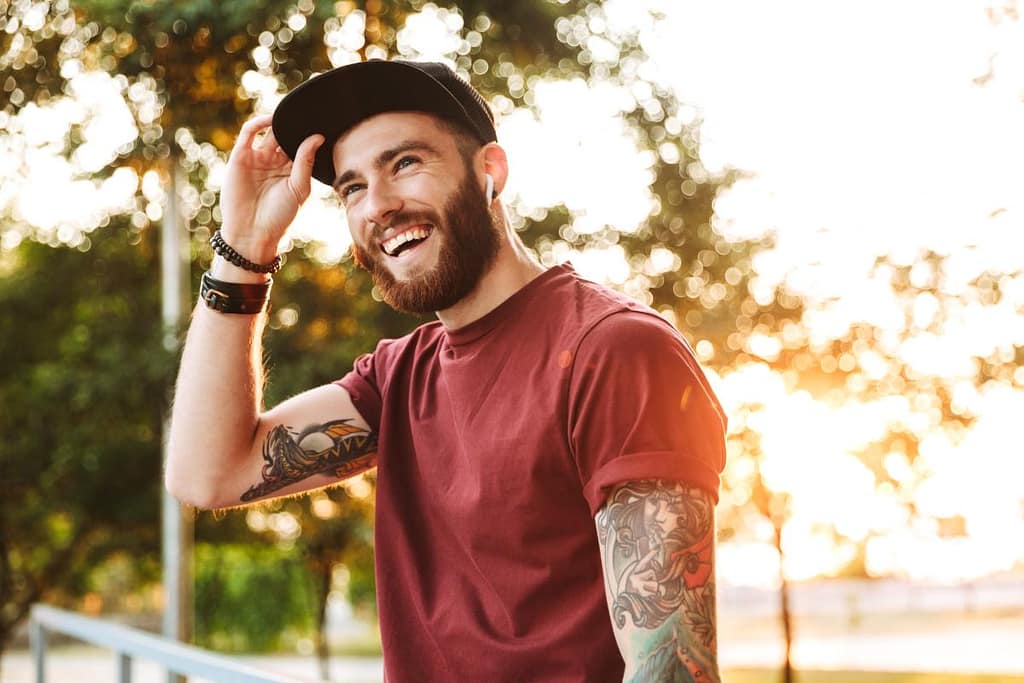 Have you heard of the newest medication-assisted treatment (MAT) option available to recovering opioid users? Sublocade, an extended-release monthly buprenorphine injection developed by Indivior, hit shelves in US pharmacies last month on March 1, 2018. A month after its release, the Sublocade injection continues ramping up in popularity as a viable long-term option for those who suffer with opioid use disorder. Real world results appear as successful as the years of clinical trials that led us to this exciting moment in recovery. As the treatment world continues to evolve, we at New Start Recovery proudly offer Sublocade as a MAT option. So how does this injection work to fight opioid addiction, exactly? 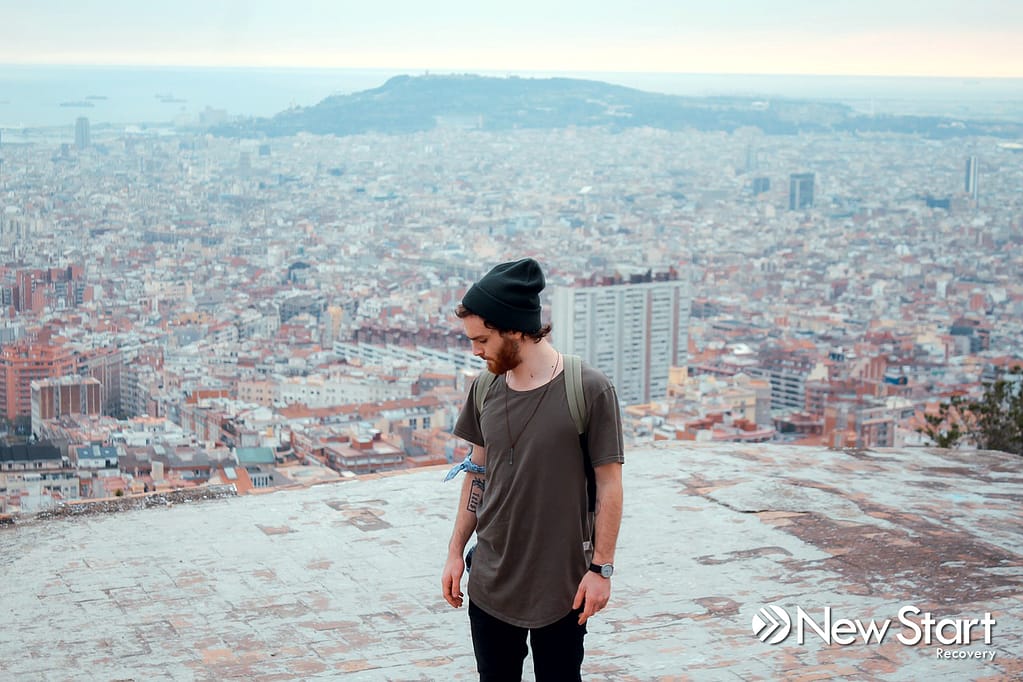 Those with previous experience in addiction treatment have probably heard of Sublocade’s main ingredient. Buprenorphine, sold under the brand name Subutex and often shortened to “bup”, has been a touchstone detox medication resource in recovery for years. Bup is used for short- and long-term opioid replacement therapy. It works as a safe taper drug for users in treatment who, under the supervision of clinical staff, take the medication to alleviate withdrawal symptoms. These uncomfortable symptoms include nausea, vomiting, aching, restlessness, and more depending on the individual’s drug of choice. Buprenorphine acts as a partial opioid agonist.

The agonist effects of buprenorphine increase linearly until it reaches a plateau. This is called the “ceiling effect.” Thus, Buprenorphine carries a lower risk of abuse compared to full opioid agonists. Buprenorphine can actually block their effects and precipitate withdrawal symptoms.

Sublocade contains buprenorphine. But it distinguishes itself from traditional bup in several ways.

While traditional buprenorphine comes in several forms, the most common method of administration in treatment is through a daily oral tablet/sublingual film 2-3 times a day (dosage varies according to severity of habit). In order to begin a Sublocade MAT regimen, individuals should have initiated treatment with “a transmucosal buprenorphine-containing product, followed by dose adjustment for a minimum of seven days”. In English, that means recovering opioid users need to go through clinical detox first before beginning a Sublocade MAT program. This establishes their dosage on traditional buprenorphine or Suboxone prior to beginning monthly Sublocade injections. If you’re seeking detox for yourself or a loved one, our addiction counselors are available 24/7 to discuss your treatment options: 855-737-7363 Sublocade is a buprenorphine extended-release abdominal subcutaneous (CIII) injection. That means the drug gets injected under the skin in the stomach. Recommended doses are 300mg for the first two months and 100mg monthly maintenance after that. More prescription information on Sublocade is available here.

Since this administration happens under the supervision of a physician once a month, there is less potential for abuse when compared with Indivior’s other agonists.

The pharmaceutical developers of Sublocade specialize in engineering drugs specifically intended to treat opioid addiction. Indivior pioneered most of the MAT options available on the market today, including buprenorphine (Subutex) and Suboxone. Indivior developed Sublocade as a response to the growing opioid epidemic.

SUBLOCADE is a scientific innovation that represents a new treatment option to help patients attain more illicit opioid-free weeks during their treatment program,” said Shaun Thaxter, Chief Executive Officer of Indivior. “In the Opioid Blockade Study, SUBLOCADE achieved complete blockade of drug-liking effects for a full month in most patients.”

So studies show that the Sublocade injection provided more favorable treatment outcomes for recovering opiate users. But why?

Although it’s an industry standard for detox, traditional buprenorphine unfortunately presents some potential for abuse. The oral tablets can be “cheeked” and saved for later. When individuals manipulate their prescribed doses in this way, they achieve a modest high. Professional treatment clinicians do their best to catch and record this behavior. But ultimately, if an individual really wants to cheek their meds, human rights laws protect their right to do so with traditional buprenorphine. That’s why oral administration presents more potential abuse hazard.

The Sublocade injection, on the other hand, gets administered by treatment professionals on a monthly basis. This takes away the daily temptation to abuse oral detox meds like buprenorphine and Suboxone.

We recognize that eventually, people must face these temptations. But any assistance in early recovery helps. So Sublocade offers a longer transition period for individuals to go through a proper therapy program. If you’d like to learn more about how Sublocade benefits individuals in treatment, our addiction counselors are available 24/7 by phone: 855-737-7363