When Problem Drinking Turns Into Alcoholism

When Problem Drinking Turns Into Alcoholism 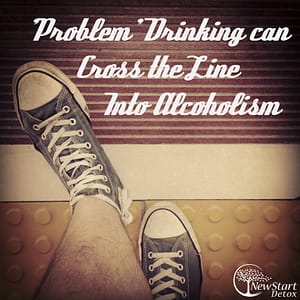 Keeping in mind that denial is the No. 1 symptom of alcoholism, sometimes a person will admit problem drinking, but cringes at the thought of admitting alcoholism. Despite ongoing education about the progression of alcoholism and increased awareness of symptoms and treatment, the word “alcoholism” still seems to bear a stigma. In order to distinguish the fine line between what one might label “problem drinking” and “alcoholism,” self-honesty is the most important tool. Those who are wondering if problem drinking is signaling the start of alcoholism would benefit from taking a sincere look at drinking patterns and consequences of drinking.

As soon as the thought “I wonder if I have a drinking problem” enters your mind, chances are that you have a drinking problem. Casual drinkers, social drinkers, occasional drinkers – whatever you want to call them – don’t wonder about a problem drinking. They can take a drink or leave it; in fact, they may often leave a drink only half consumed. Such is not the case for problem drinkers. Professionals call it “alcohol abuse,” rather than “alcoholism.” Some of the patterns include:

Ignoring responsibilities
Alcohol abusers may avoid spending time with and caring for their children or who consistently make excuses for missing days at work. They also forget about commitments with friends and associates.

Taking risks
Problem drinkers may drive while under the influence, or they may ignore medical advice.

Problems with the law
When someone abuses alcohol, he often finds himself in legal trouble. This includes domestic violence, fighting and public intoxication.

Problems in relationships
Alcohol abuse affects friendships and love relationships. Problem drinkers continue to drink, even at the risk of losing loved ones.

Stress relief
People who drink to relieve stress are avoiding the underlying issues. Drinking too much aggravates the problem rather than relieving it.

While some nuances of language may distinguish problem drinking from alcoholism, the truth remains that alcoholism is a progressive problem. Problem drinking can move quickly and easily into signs of alcoholism, including increased alcohol tolerance, withdrawal and loss of control.

Posted in Addiction, Alcoholism, For Loved Ones
Tagged Diagnosing Addiction