There are countless perks to look forward to in recovery. Money increase, being able to enjoy hobbies again, feeling healthier, a happier family, better relationships. But what about sex? You may have noticed that your libido suffered in your addiction, a casualty that likely didn’t bother you, as an addict’s attention lies solely with his drug of choice and consequential high. Now that you’re in recovery, you want to be able to enjoy your new, clean life… sex included.

However, it’s going to take some adjusting for your sex life to catch up to you in recovery. Addiction affects your brain and your body. And because sex is part of brain chemistry and body response, it is affected as well. Unfortunately, any sexual dysfunction that grew in addiction doesn’t just go away the minute an addict gets sober. There will be some lingering effects in recovery.

Opioids Act As Stop Lights for Your Sex Hormones

Quick physiology lesson: the production of sex hormones in the body starts with the hypothalamus, which secretes gonadotropin-releasing hormone (GnRH). GnRH then prompts the pituitary gland to release the gonadotropins LH and FSH. These gonadotropins are what cause the production testosterone, estrogen, and progesterone (finally, names that we actually recognize). Opioids actually inhibit GnRH, which causes a decrease in production of LH. In turn, this decrease of LH causes a decrease of testosterone. We all know testosterone plays a role in adult development but what exactly does it do?

It’s unrealistic to think that the decrease of testosterone caused by opiates is a minor thing that only a blood test would read. In truth, you’ll notice that decrease in the bedroom as well as when you look in the mirror.

The good news is your testosterone levels will eventually return to normal after the drug use has stopped. But whether or not your sex drive returns is completely dependent on the individual. Normal testosterone levels will smooth the path for a healthy sex life, however it can’t cure your libido on its own. Opioid addiction leads to other problems like diet and exercise issues, both of which also affect a person’s sex drive. If these things aren’t also corrected in recovery, then your libido will still suffer.

Cocaine and the Aphrodisiac Folly

Cocaine is commonly thought of as an aphrodisiac because of claims that it increases sex drive. Because cocaine is a stimulant, it can make a person feel more alert and confident, which will also make sex feel easier and better. People hype up sex on cocaine because of the euphoric high that cocaine produces. If you’re already on a cloud nine high, it makes sense that other pleasurable experiences like sex would only be enhanced. But it’s not all green lights and blue skies. Chronic cocaine use can lead to impaired or delayed ejaculation.

What Goes Up Must Come Down

While ejaculation issues will likely cease in time during recovery, the aphrodisiac quality of cocaine now becomes an issue. Sex during a euphoric high may be good at the time, but what happens when that high is eliminated in recovery? Sure, you can find other things that make you happy and excited, but your perception of pleasure will be skewed because of the dependence you once had on drug-stimulated euphoria. Put simply, sober sex may not feel good anymore. This euphoria dip may cause a negative impact on arousal and sexual stamina. Fortunately, your sex life can and probably will improve over time. And we have some suggestions to help along the way. 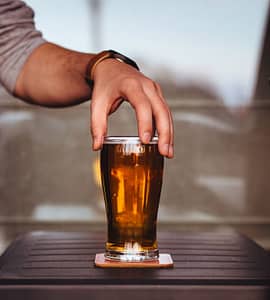 Okay, so we’ve all heard the phrase “whiskey dick” before, right? It’s not a myth. One study found that 72% of men with alcohol dependency had one or more sexual dysfunction. The study also found that the most common sexual dysfunctions that resulted from alcohol abuse were premature ejaculation, low sexual desire, and erectile dysfunction. Erectile dysfunction (a.k.a. “whiskey dick”) is primarily caused by alcohol’s effect on blood vessels in the body. During an erection, the penis fills with blood. Blood vessels will then close to prevent backflow of that blood, so the penis will stay erect. But alcohol consumption causes those blood vessels to expand, which allows for more blood flow but also makes it so that those blood vessels can’t close. This means that a man can get an erection but have trouble holding it.

Again, these problems can be improved in recovery. But treatment for alcohol addiction won’t necessarily cure every sexual dysfunction. Alcoholism can lead to other major health issues, such as depression, anxiety, and diabetes. All of these issues can negatively affect a man’s ability to hold an erection. Unfortunately, addiction treatment won’t also cure any of these co-occurring disorders. So, a recovered alcoholic may not drink anymore but he may still experience erectile dysfunction due to resultant mental or physical health issues.

The first step to solving your sexual misfortunes is getting help for your addiction. Treatment and recovery will help repair much of the damage that substance abuse and addiction do to a person’s sex life. But there are a few other things that you can do to help.

Seek Help for Any Co-Occurring Disorders

Substance abuse can lead to other mental disorders, such as anxiety and depression. Both of these disorders can negatively affect a person’s sex life.

Work on Your Diet

The physical changes that accompany an altered diet can also have a negative impact on a person’s sex life. Whether your drinking caused your appetite to be suppressed or an opiate addiction hijacked your metabolism, recovery is the perfect opportunity to fix your diet.

Exercise is a good way to help your body’s natural production of endorphins and hormones. It will also help to increase stamina. All of these things will help in the bedroom.

Sexual dysfunction may be embarrassing but it’s a very common reality among addicts. While treatment alone can’t cure every form of sexual dysfunction that accompanies addiction, it’s certainly the right first step. If you or someone you know is struggling with addiction, New Start can help. Call our staff at 855-737-7363 or reach out to us on our live chat.