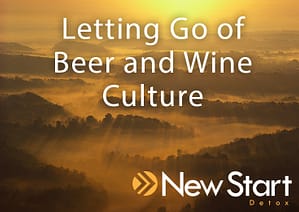 Drinking is an easy way to create a social scene.  Many times quitting drinking means giving up an entire social scene. The problem is convincing oneself that it is time to quit.

One of the hardest parts about leaving the drinking scene is the loss of friends.  One’s drinking circle can include long-time friends from momentous points in life. For instance old school buddies or friends who have attended each other’s weddings or band mates.

Some friends may not have an addiction but if they are a part of the scene it may be hard to find time outside of it for a sober meet up. Other friends may not be willing to meet up at all. The golden rule is if they are true friends they will understand and support any effort towards living a better life.

Quitting drinking could also create in the newly sober a leader. One could go from champion drinker to being the friend that has made an incredible turn around.  The one that pioneers the trail for other friends who have had a hard time giving up their favorite drinking past times.

Food, beer and wine go hand in hand. Many cities have created cultural meccas around pairing anything from the classic cheese and wine to which beer goes best with a breakfast meal events. San Diego, Calif. and Portland, Ore. are two places where this culture seems to have no boundaries as far as how many alcohol events or small breweries can pop up in a small radius.

If one is enthralled with the food and booze scene odds are there are others who are able to lead a sober life and still continue to be foodies. They may take time invested in tea or coffee culture rather than booze city. They may spend more time at farmers markets than dance floors or seeing out new dessert bars rather than the latest themed club.

If cooking at home is a big hobby, there are many, many substitutes for cooking with alcohol. In most recipes the alcohol can just be removed. There are quite a few websites that have conversion tables and replacement charts for booze free recipes.

Food is not the only thing a cocktail goes with these days. The local art scene, trivia, bowling, writing groups, even some marathons are either centered around or have a alcohol component these days.

Everybody has heard the testimony of a sober person “once I left the drinking scene I found other better, healthier hobbies and real friends.” This might sound like “blah, blah, blah,” and although cliché, it is true.

If the knowledge that there are other hobbies and healthier people out there may not be inspiring enough to encourage some drinkers to give up their social scene how about the making “touching story” be one’s own. Fill in the blank, “if I don’t quit drinking then…” with an honest assessment of the health, social and emotional consequences of drinking then tell oneself other hobbies are not worth looking for.