Do you ever think about early human life and how these people figured out what was safe to eat, what was poisonous, what could cure illnesses, and what could kill you? You hear about how early humans lived off the land and thrived. They didn’t have the DEA or the FDA telling them what was what. Could we do that now? What would we do if we didn’t have ibuprofen, Epsom salt, or Tums?

Many of our medications are lab made with synthetics and chemicals. But a lot of them are derived from plants as well. Marijuana is a classic example. MJ advocates are all for broadcasting the fact that it’s a plant that comes straight from the earth. Kratom, another “Earth drug,” has joined that scene as well now. But is it a miracle drug or is it as dangerous as the DEA claims it to be? 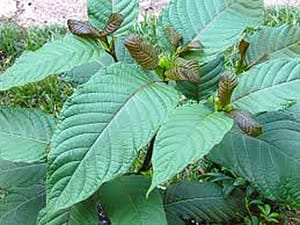 Kratom is a plant. It’s actually a tropical evergreen tree that is native to Southeast Asia. Its scientific name is Mitragyna speciosa. Its bright green leaves have been used for hundreds of years to relieve pain. The leaves can be eaten raw or crushed and used for tea, tablets, or capsules. Traditionally, people in areas where the plant grows have used kratom to relieve musculoskeletal pain. It can also increase energy and appetite, as it comes from the same family as the coffee plant.

Kratom in the World of Opioids

Kratom is not an opiate. But it does target the same area of the brain as opioids like morphine, codeine, and fentanyl. Because of this, people misuse it for its minor euphoric effect. Unlike the intense, rushed high of heroin, kratom gives an effect similar to a few strong cups of coffee or a 32-ounce beer. Like weed, kratom is a culprit of the recreational, “harmless” high (more on harmlessness later).

The more subdued and manageable effects of the plant make it appealing for treating people with opioid addictions. Kratom can be given to opioid addicts in controlled doses to help wean them off of stronger opioids and guide them through the withdrawal.

If we look back at the traditional usage of kratom, we can see why people might think to use it to treat opiate withdrawal.

Furthermore, because the drug targets the same area of the brain as opioids, it can help to fill their voids and dial down cravings.

The Dangers of Kratom

People hear “not an opiate” and believe that the opiate-like high they feel after using kratom is safe. But its biggest danger is that it’s addictive. Frequent use can cause a physiological dependence on the drug. The effects of kratom may be less than those of OxyContin or Vicodin but it still reacts with those same opioid receptors in your brain. You’ll start to crave the high it gives you and can even start experiencing withdrawal symptoms if you try to stop. This withdrawal is a sign of physical dependence. Most often, kratom abusers will experience withdrawal symptoms similar to the common cold as well as depression and diarrhea.

Unfortunately, there has not yet been enough research and commentary on the usage of kratom. The plant has been around for a long time, but its use was maintained within small areas of Southeastern Asia until recently. The DEA had actually moved to ban sales and make it a Schedule 1 drug (like heroin and ecstasy) in September of last year. However, it withdrew its ban and is currently leaving the drug open to discussion because of the lack of research and knowledge on the drug.

I’ll tell you that early human groups weren’t magically born with knowledge about what plants were good for them and which ones would kill them. They did their own limited types of research. We know from the people who have used kratom for centuries that it can successfully treat pain and boost energy. The withdrawal and potential negative side effects may not be as bad as opiates that work similarly, but that doesn’t mean kratom is a miracle drug. As we’ve seen with the marijuana debate, even “earth drugs” spawn controversy. The best thing we can do is to be wary, educated, and keep away from addictive substances. Unhealthy dependencies are just that: unhealthy.

If you or someone you know is struggling with an opiate addiction, New Start can help. Call us at 855-737-7363 for a free and confidential assessment or reach out to our staff on our live chat.