Is Josh Hamilton Really Out of the Game?

Is Josh Hamilton Really Out of the Game? 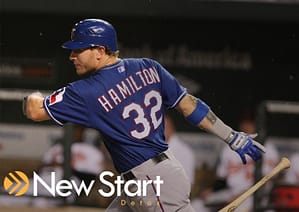 Josh Hamilton’s alcohol and cocaine addictions got the best of him last month when he suffered his third relapse as a major leaguer. His other relapses were mainly about alcohol, so the addition of cocaine to the mix could be a sign of an escalation. His bosses aren’t happy with him and it looks like he could be on the brink of even losing his career if he doesn’t turn himself around.

Josh Hamilton may not be in a particularly strong career position. But he could be in a very strong position for recovery from his addictions to cocaine and alcohol. If this last relapse signifies his “bottom,” he could be on his way to a better life all around.  Desperation is one of the best motivations for recovery, and as hard as it is to watch someone go there, desperation is usually one of the best things that can happen to a person with addiction issues like Hamilton’s. What that means is that Josh Hamilton is not necessarily “out of the game.” But fans have to be patient. It could take time to see Hamilton make a thorough comeback. Addiction is hard to beat, and recovery is a lifelong process that requires persistence and a strong commitment.

What is going to matter right now for Hamilton, his team, his fans and his loved ones, is what he does after this relapse. If he has gained some recovery skills over the years, now is the time to hone them. If he needs new ones, it’s time to find out what they might be and how to use them. He’s going to have to surround himself with people who support and encourage his recovery, and he’s going to need to make a new dedication to being clean and sober. With renewed commitment, this can be Hamilton’s final relapse, and he can come back stronger than ever.