Hollywood Isn’t All Glamorous: Addiction in the Entertainment Industry

Hollywood Isn’t All Glamorous: Addiction in the Entertainment Industry

I could start a rumor and say Blake Lively had an addiction problem which is why she doesn’t drink and you’d probably believe me. Addiction in Hollywood and the entertainment industry is very common. You hear celebrities going through addiction like it’s a normal thing. But it’s a really unfortunate problem.

That’s what happens when you’re a celebrity.

They are doing it for attention.

When you hear of someone passing in the Hollywood scene, you can’t help but wonder if it has anything to do with drugs or alcohol. You hear about Michael Jackson, Heath Ledger, Brittany Murphy, Cory Monteith, Prince Rogers Nelson…  they all have at least one thing in common. It’s easy to think it’s the norm in the entertainment industry. But, why is it so common?

Many celebrities will receive heroin or drugs instead of their paycheck. Dope is the only thing that matters to them.

No Time For Accidents.

Celebrities are often doing scenes that could cause simple/serious accidents. But what are they supposed to do if they twisted their ankle or fractured their arm? You can’t just stop production. Instead, celebrities will go on pain medication to ease their discomfort, and that can result in an addiction.

Celebrities are easily putting on 10+ hours a day for a movie or show. And if they’re doing this for weeks straight, it can cause some serious body damage. To get them through the long, endless hours of taping, they might result to drugs or drinking.

Celebrities can ask their assistants, managers, or trade their earnings for dope. Celebrities can also trade drugs in return for A-list parties. This makes it extremely easy to access drugs.

In a recent blog article about romanticizing drug use in films, we explain how dangerous is it to portray drugs in a nonserious manner. You might see films that show someone high on drugs and it could look fun or cool. The creativeness that the scene portrays and the comedy it holds show drugs can be really fun. By portraying it in this way, it’s teaching the audience and viewers that drugs aren’t that dangerous. The films are only showing the fun and comedic side of drug abuse and being high. But this can result to the viewers wanting to try it out themselves.

Nurse Jackie is a TV series that portrays a nurse, named Jackie, as an excellent nurse. The sidekick? She’s also an addict. House is the same way, where Dr. House is excellent at what he does, but he’s also an addict. These shows are also examples of high bottom addicts. They are functioning perfectly fine and can do their job, but they are straight addicts. There are several shows that display addicts, but the actors themselves aren’t addicts at all.

Celebrities aren’t actually taking drugs or getting high in movies. For scenes with heroin or snorting heroin, they use a fake substance called inositol. Snorting the fake substance could result in a short “high” feeling because it’s essentially Vitamin B, but it only contains vitamins from plants or animals.

Fake cannabis can be either herbal tobacco, herbal ecstasy, or wizard weed. Herbal ecstasy is an herb-based product that can be smoked or snorted. The movie Pineapple Express used wizard weed which can be used in place of marijuana. It can be rolled into joints or put into bags but it has no high effect.

Actors who drink in scenes are most likely drinking tea, water or “near beer” which is a non-alcoholic beer that contains less than .5% or less of alcohol. “That’s probably about how much alcohol is left on your teeth after you gargle mouthwash.” 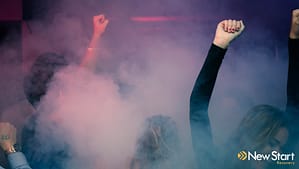 Though drugs and alcohol weren’t big on the set of production, it doesn’t hide the fact that many celebrities do them.

“In fact, snorting cocaine can be as commonplace as sipping a glass of champagne. After a night out in the clubs, the party typically goes back to an oversized mansion somewhere in the Hollywood Hills. There’s music, a pool table, more alcohol and a bunch of pretty people doing a line or two.”

A typical hollywood party usually has cocaine activity in one of the bathrooms. You can count on getting a fix if you arrive past midnight to the party. Nightclub owners are well known to dispense cocaine to celebrities as a “payment” for them to come to their club.

It’s A Big Problem in the Entertainment Industry

If you or someone you know is in the entertainment industry, you might learn they have a busy life. From taping to interviews and fans, life can be super hectic. Some celebrities result to drugs or alcohol.

It’s important to see the signs of addiction and seek help. Addiction is a dangerous disease and you’re not alone.

If you’re struggling with addiction, New Start can help. We offer a small and personalized plan to help you recover from addiction. Call us at 855-737-7363 for more information or to see if your insurance covers treatment.