So, you woke up feeling good about your day. Another morning feeling sober and healthy… a.k.a. another morning without a hangover. You made it through work and checked off quite a few things on your to-do list. And to top it off, traffic wasn’t even that bad today. Not once did you even think about wanting to drown your usual road rage with a beer or six as soon as you get home. Next on your list is the grocery store. You’re missing half of the ingredients you need for that dinner recipe you’ve been thinking about all day, but that’s okay because you actually remembered to bring your reusable bags for once. And you’re doing just fine grabbing only the things you actually need. But then you pass the liquor aisle. 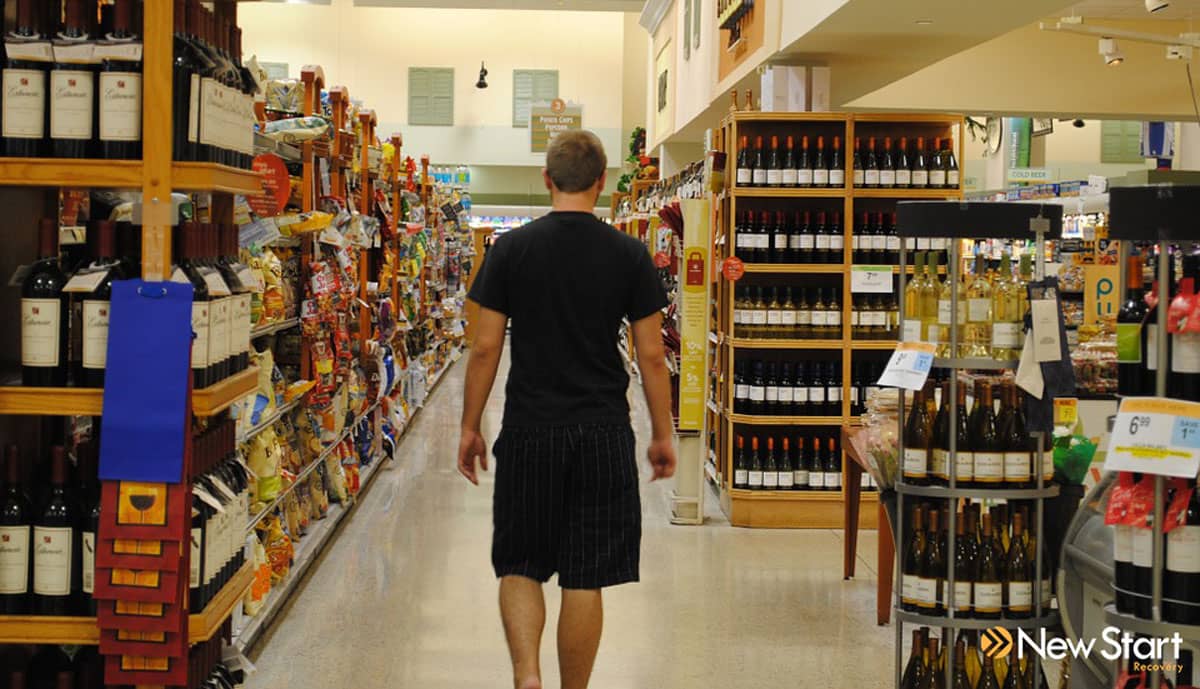 As dangerous and potentially deadly as alcohol is, it’s still legal. It’s sold in convenience stores and gas stations, advertised on just about every other billboard, and even lines floor-to-ceiling shelves at the grocery store.

All recovering addicts deal with temptations. But because alcohol is legal and widely sold in what seems like almost every store, recovered alcoholics have to deal with that temptation daily. Grocery shopping probably takes the cake as the biggest temptation and potential trigger because we have to do it. We need to eat. So, we have to frequent the grocery store. For everyone else, passing the liquor aisle is no big deal. But for a recovered alcoholic, that aisle can resemble pain, temptation, and potential relapse. However, there are some things you can do to help manage that temptation.

So, let’s look at some real and practical tips to avoid putting that alcohol in your basket:

“Playing the tape” refers to the mental tape you have recorded over and over again of the things that happen when you drink. Treatment programs actually teach it as a relapse prevention strategy for recovering addicts. It’s essentially the story you tell yourself to keep from stumbling down the wrong path again.

For example, you’re at the grocery store, staring at that liquor aisle, thinking, “I can handle a drink or two.” So, play that tape. Picture yourself having a drink or two. Then you’ll see yourself going for another, and another, and another because, if you’re being realistic, it’s never just “a drink or two.” You see yourself fumbling around, polishing off the bottle, and then grabbing for your keys because you need more. If you keep playing the tape, you’ll see yourself getting in your car and driving to get more alcohol. You’ll see yourself drunk and trying to converse with the cashier who’s asking for your I.D. The tape shows you drunk driving home, swerving between lanes. Then you’re at home, probably blacked out, and looking for any old pill bottles. Next, you’re passed out on the couch with your doors unlocked and real-life you just knows that the hangover and guilt the next morning will be enough to push you to drown it in more alcohol. 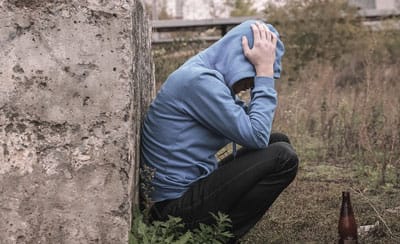 It’s not a fun tape, but it will help you see that grabbing that alcohol is a bad idea. The key is to play the tape all the way through and repeat it until you’ve talked yourself back into a safe mental space. If you merely start it, you’ll only see yourself seemingly having a good time with a small buzz. But if you play the tape all the way through, you’ll see all the bad things that can (and probably will) happen if you buy that alcohol. Of course, each person’s tape will be a little bit different because, while all alcoholics share the same disease, they don’t share the same stories. But no matter what, the tape ends badly. And if reminding yourself of the things that can happen only once doesn’t cut it, repeat it. Play it as many times as you need to to feel safe again.

It’s not always easy to confront the reality of addiction. Playing that tape isn’t necessarily easy and it definitely won’t be fun. But it’s one of the simplest ways to remind yourself that you’re better off sober. With sobriety comes room for happiness. Your tape will show you that giving in to the temptation of your grocery store liquor aisle leaves no room for happiness.

2. Use Your Budget as an Excuse

Alcohol is expensive. It’s usually one of the things that people splurge on outside of their grocery store budget. But an alcoholic won’t consider buying alcohol splurging; it’s just a part of the habit. Most addicts don’t even realize how much money they’re spending on alcohol at the time. In fact, financial issues are one of the telltale signs that your loved one might be struggling with alcoholism.

Using your budget as an excuse to keep the alcohol out of your basket can be very effective if you have the discipline to stick to that budget. You don’t actually have to write out a financial spreadsheet or make a list of how much you can spend on each food and drink category (unless you want to). Instead, you can just say to yourself, “Alcohol is too expensive, especially when I shouldn’t even drink it.”

What it comes down to is why waste money on something you’re not supposed to use?

It’s not good for you, it has no benefits, and it will probably lead you down a dark and dangerous road. Use your budget as a quick excuse when that temptation comes calling. You could be spending that money on the other things that are actually important and relevant to your current life in recovery. For example: food. And that’s not even meant to be ironic. You can buy so much more food if you don’t waste your money on alcohol… and I’m not just talking about buying the name brand box of Frosted Flakes instead of store brand for once.

But in all seriousness, it’s not just your sobriety and health that alcohol takes a hold of. Alcohol affects many different aspects in an addict’s life, from physical health to relationships to finances. So, why waste money on it when you’ve come this far?

3. Substitution / Treat Yourself Instead

This is definitely the most fun (and still practical!) way to avoid putting alcohol in your shopping cart. Rather than buying that alcohol, treat yourself with something else instead. That simple substitution can be enough to even make you look forward to skipping the alcohol aisle at your grocery store.

Treating yourself doesn’t have to be elaborate or expensive. It could mean grabbing those new mocha-flavored Oreos you’ve been wanting to try but felt bad letting yourself have. Just take your normal shopping list and add one treat to it to grab instead of alcohol. That substitution goes beyond a simple physical replacement. Alcohol – like other drugs – messes with the reward system in an addict’s brain. Unlike opiates and amphetamines, which trigger dopamine directly, alcohol triggers the release of endorphins, which indirectly releases dopamine. Those endorphins and dopamine stimulate your brain’s reward system, which causes feelings of pleasure.

Natural events can also stimulate your reward system – and in a much safer way at that! Treating yourself is essentially the same thing as achieving a reward. It causes feelings of pleasure and happiness, and no alcohol was even involved. You’re basically substituting that alcohol-induced chemical reaction in your brain for a more simple, natural, and healthy happiness just by treating yourself.

4. Take Someone Shopping with You

If you really struggle with the temptation of the alcohol aisle at your grocery store, you might consider taking someone shopping with you. They can help hold you accountable and offer support through that temptation.

It’s important to make sure that the person who goes with you knows they’re there for support. They don’t have to obsess over it or constantly remind you not to grab the alcohol, but they should realize when their help is needed. Additionally, it should be someone who knows enough of your story to respect your efforts in recovery. Many people don’t realize how strongly addicts are affected by their drugs or drink of choice without having been personally exposed to addiction. If your support person doesn’t have a good grasp on why you shouldn’t put that alcohol in your basket, then they can’t possibly be as efficient in that support as you need them to be.

On the other hand, you shouldn’t rely too much on other people. Taking someone shopping with you can be a huge help and might be a really good idea, but you should be strong enough in yourself that you don’t end up using that person as a crutch. Your significant other, friend, brother, mother, and roommate are not responsible or accountable for your sobriety. Only you are. It’s okay to ask someone for support but it’s not okay to rely on them completely.

You’re In Charge of Your Own Life

Alcohol ran your life in addiction… don’t let it run your life in recovery. Going to the grocery store is a normal part of life. It shouldn’t be something you dread because of the temptation it houses. Unfortunately, that’s the way it is for many recovering alcoholics. Hopefully these tips can help keep you strong and resolved so that a simple run to the grocery store doesn’t ruin your good days.

If you or someone you know is struggling with alcoholism or another substance addiction, New Start can help. Call us at 855-737-7363 for a free and confidential screening.