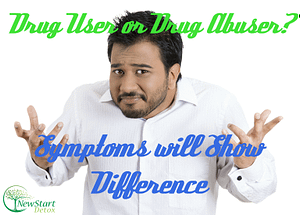 Professionals in the field of drug addiction have begun to provide guidelines in determining the seriousness of a drug-use problem. The guidelines can help individuals decide if they have crossed the fine line between recreational drug use into drug abuser that puts their health at risk with drug addiction. In order to assess one’s behavior, self-honesty is imperative.  Denial is the No. 1 symptom of any addiction problem, and drug addiction is no exception.

Because drugs are prevalent, peer pressure often plays a role in the desire to try different drugs to find out the effects they have. If a person decides to experiment with drugs, then it is important to pay close attention to one’s behavior while using the drugs and the frequency with which they are used. Even experimental use can cause some harm and set an addiction cycle in motion.

People who use drugs in social situations often are trying to loosen up or fit in. They are just “out to have a good time.” When drug use extends beyond the party, it could be a red flag warning of potential drug abuse. People who think they are social drug users also need to take a look at the consequences. The results of drug use can be an indicator of a problem.

Going on a binge

In the field of addiction, alcohol is considered a “drug of choice.” When someone indulges in hours of heavy drinking once or twice a week, the consequences may include alcohol poisoning, various sexual repercussions, health issues and proclivity toward accidents. Even at this stage, treatment could be in order.

Addictive behaviors of a Drug Abuser

Even though the distinctions may be fuzzy, anyone exhibiting problems with drug use can be on the road to drug addiction. Users who spend considerable time and energy thinking about drugs, using drugs and recovering from drugs are well on their way to addiction. As tolerance for drugs or alcohol increases and withdrawal symptoms become more frequent and severe, the chances of addiction increase. Chronic drug addiction requires long-term treatment.