We all have that one friend who decides it’s a good idea to dance on the tables at the bar, screaming “shots, shots, shots!” and then blames it on the tequila the next day. “Tequila makes me crazy,” she explains. And you believe her because she does get crazy when she drinks tequila. You’ve seen it happen enough times to not question her.

But how does that make sense? Is there actually something in tequila that makes people act crazy? Thinking that different alcohols give you different types of drunk is not an uncommon thing. The claim shows up in song lyrics, your friends’ justifications, and even amidst your own hangover-clouded regrets. But is it actually true?

There is no actual science behind the theory that different types of alcohol create different types of drunk. Researchers explain that it’s the ethanol in liquor that gets you drunk. And ethanol is ethanol. So it doesn’t matter if that ethanol is in tequila or vodka; you’ll get the same drunk either way, technically speaking.

One study looked at the effects of different spirits in rats. Rats were injected with different types of alcohol (cognac, tequila, vodka, scotch, and straight ethanol) and then observed for variations in impairment. The study was meant to determine if the other substances (meaning those that aren’t ethanol) have different affects on our moods. These substances are called congeners. However, the researchers didn’t notice any difference in the levels of “drunk” between the rats. They all appeared to be impaired by the different alcohols but not in any noticeably different ways. Of course, because these are rats and not humans, it’s a little harder to perceive if some feel a little sadder than others…

Another study looked at whether or not the amount of congeners in alcohol will give you different drunks. But even that research is a little faulty. Bourbon, for example, is known to have more congeners than other types of alcohol. It has about 37 times more congeners than vodka. However, the study actually synthetically quadrupled the amount of congeners in the bourbon they used but didn’t do the same to the other types of alcohol. So, while those who consumed the bourbon seemed to be more drunk than those who consumed other types, it’s hard to say if that same difference would occur at a bar or a party. Bourbon isn’t enhanced like that in the real world. But even so, a higher level of drunkenness doesn’t exactly mean that your mood is different. You might just experience a higher level of impairment.

Compensating for the Expected Effect

It’s very possible that this belief that we experience different types of drunk with different types of alcohol is fueled by our overcompensation to meet the behavior we expect. That’s confusing, but let’s break it down. We hear that tequila makes people crazy and whiskey makes people frisky so often that it becomes an inherent expectation when we drink it. If someone expects tequila to make them act crazy, they’re likely to push themselves to act that way, even if they don’t realize they’re doing it.

That said, there is actually some validity to experiencing different moods when you drink different types of alcohol. But it has more to do with your own experiences than it does with the actual alcohol. Memory plays a huge role in the way things affect a person in the present. It’s the reason behind why the smell of hamburgers cooking on a grill reminds you of the Fourth of July. If you caught that scent enough during that particular event, you’ll associate the two (event and smell) in the future.

In the case of alcohol, you don’t necessarily need multiple connections before you start associating alcohol type with behavior because it’s usually pretty powerful the first time. For example, if you drink too much tequila, go crazy, and end up draped over the toilet a few hours later, you’re likely to always associate tequila with that experience. If you drink whiskey and get in a fight with some other dude at the bar, you’re likely to continue to associate whiskey with aggression in the future.

The “Wine Makes You Whine” Myth

Have you ever heard someone say that wine makes them sad? Probably. There’s a little bit of truth to that, but not in the way you might think. Wine doesn’t actually make a person sadder, but it can cause a person to become more tired while drinking it, which can then lead to melancholy. The grapes used to make red wine actually contain relatively high amounts of melatonin. Melatonin is the chemical secreted by your brain that tells your body when it’s time to sleep. So, red wine will make you sleepier when you drink it. Melatonin isn’t supposed to make you sad or whiney, but being tired can.

All types of alcohol will give you the same basic hangover symptoms: nausea, headaches, dehydration, and fatigue. But the severity of these symptoms partially depends on the type of alcohol.

Remember those congeners we talked about earlier? The more congeners a spirit has, the fewer drinks are needed to consume to get drunk. Dark liquors typically contain more congeners than clear liquors. (Those congeners are also responsible for the darker colors in these liquors). So, bourbon – which has 37 times more congeners than vodka – will get you drunk faster than vodka. But that also means that your hangover will potentially be worse after drinking bourbon than it would be if you drank the same amount of vodka. However, obscene amounts of vodka will certainly surpass smaller amounts of bourbon in terms of hangover severity. 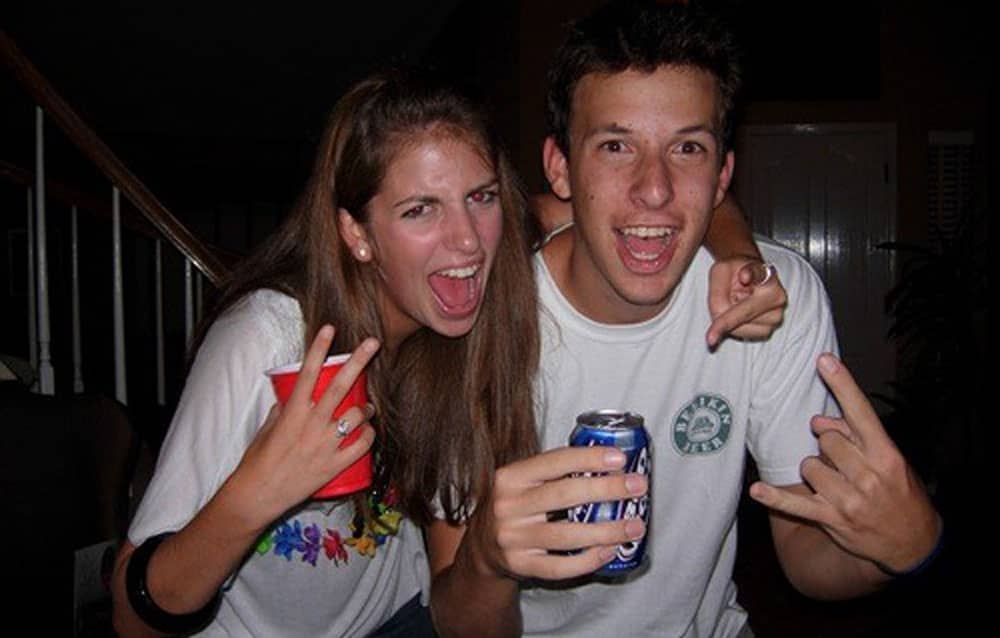 So, maybe certain types of alcohol don’t cause different types of drunk. But all types of alcohol can contribute to addiction. It doesn’t matter if you believe that memory association, different amounts of congeners, or compensation causes the behavior… if that behavior becomes a habit and takes over a person’s life, it needs to be addressed. If someone is an alcoholic, their behavior will be destructive and dangerous. Alcohol type won’t matter.

Signs and Symptoms of Alcohol Addiction:

Becky dancing on the table after a couple of tequila shots may not be a reason to worry. But alcoholism is.

If you or someone you know is struggling with addiction, please don’t hesitate to reach out for help. Call us at 855-737-7363 or talk to us on our live chat.