We’ve learned to become wary of drugs and alcohol because of the dangerous and dark grasp of addiction. And while addiction is harmful enough on its own, changing a person’s behavior, thoughts, and lifestyle, it can also lead to many other chronic illnesses. As cliché as it sounds, actions have consequences. And addiction’s consequences (which includes this list of chronic illnesses) can be deadly.

Chronic Illnesses that Can Result from Substance Abuse:

Hepatitis C is the first of the chronic illnesses on this list. It’s caused by a virus that infects the liver and is unfortunately very common among addicts.

Hepatitis C is Common Among Addicts

Over 70% of people who inject drugs are living with Hepatitis C.

Hepatitis C is commonly transmitted through contaminated needles. Intravenous drug users who are deep in their addictions are likely to share needles (even if they understand the risk of infection) to get their high or keep withdrawal symptoms at bay. But needles aren’t the only things to worry about. Preparation equipment can also spread the virus. A group of people might all share drugs that were prepared with the same equipment. If a contaminated needle is inserted into a cooker or passes through a filter, those materials can also become contaminated and the whole group will be at risk of infection.

Why is Hepatitis C So Dangerous?

Acute hepatitis C symptoms are mostly flu-like. But the acute infection can grow into a chronic illness. Chronic hepatitis C can have major negative effects on the body. The liver is most affected by untreated hepatitis (it is a liver virus, after all). Untreated hepatitis can lead to severe scarring or cirrhosis. The damage will slow blood flow and impair the liver’s ability to process nutrients and toxins. It can also lead to liver cancer and end-stage liver disease. Your liver can fail completely. Hepatitis C can also damage the kidneys, bones, blood vessels, joints, and pancreas. It’s incredibly important to get tested for hepatitis C. It can be treated if caught early enough and the diagnosis can help prevent the disease from spreading.

2. Cirrhosis of the Liver

One of the main symptoms of cirrhosis is yellow skin, or jaundice. Your liver plays a main role in waste management in your body. One of its responsibilities is breaking down aged red blood cells, creating bilirubin in the process. Bilirubin is a yellow compound that is essentially a byproduct of this blood cell destruction. It’s usually excreted through urine and bile. However, if your liver is damaged, it can’t function properly. So that yellow compound builds up, turning your skin a lovely yellow color. Other symptoms of this chronic illness are weakness, fatigue, and easy bruising. So, not only can your skin turn yellow, but you might also sport bruises as well.

Alcohol’s Role in Cirrhosis of the Liver:

About 10 to 20% of heavy drinkers will develop cirrhosis of the liver.

The liver processes all things a person consumes, including alcohol. However, your liver can only process a certain amount of alcohol at one time. Too much alcohol will impair the liver’s function and cause a chemical imbalance in the body. Chronic alcohol abuse and will cause irreparable damage to the liver cells, resulting in the formation of permanent scar tissue around the liver. This is cirrhosis. While your liver could only handle a certain amount of alcohol previously, it now won’t be able to process any.

Why is this Disease Dangerous?

Your liver has many critical roles in healthy body function. For one thing, it produces substances that your body needs to survive, such as proteins that are necessary for blood to clot. If your blood can’t clot, wounds won’t heal. The liver also helps to regulate glucose and lipids, which are essentially sugars and fats. Your body uses these as fuel, which is why weakness and fatigue are common symptoms of cirrhosis. On top of the typical complications of cirrhosis, the illness also increases the risk of primary liver cancer. Unfortunately, cirrhosis of the liver cannot be reversed and can only be cured in some cases with a liver transplant. Liver failure and death are not uncommon results of cirrhosis.

people die every year from cirrhosis of the liver in the U.S. alone.

HIV (human immunodeficiency virus) is the virus that causes AIDS (acquired immune deficiency syndrome). It is an infectious virus that is transmitted through the sharing of blood and other bodily fluids. Drug abuse has had a huge role in the incidence of HIV.

1.1 million people are living with HIV in the U.S. alone. Of those people, it’s estimated that 1 in 7 don’t know they’re carrying the infection.

The initial symptoms of HIV have been described as “flu-like.” Fever, headache, sore throat, fatigue, and nausea are all common symptoms. Because these symptoms are all commonly associated with your average flu, many people don’t realize they’ve contracted the virus. To make matters worse, the second stage of HIV is typically asymptomatic. Most people won’t see or feel any symptoms during this stage. It can last 10 years or more. (Imagine 10 years living with HIV and not even realizing it). However, while symptoms might not be apparent, the virus will still be hard at work destroying your immune system by killing CD4 T-cells. 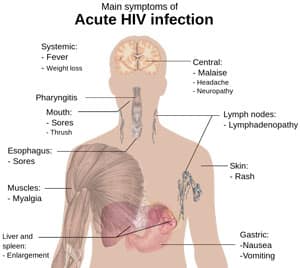 The Connection Between HIV and Drug Abuse:

Again, HIV is contagious. It can be contracted through the sharing of blood and other bodily fluids. Intravenous drug use is linked to HIV and AIDS, primarily because of shared needles. Needles, even if they’re rashly “cleaned” with bleach, can pocket tiny amounts of blood after they’re used. So, when the needle is shared, that blood comes in contact with the second person’s injection site. It doesn’t take much for HIV to be transmitted. The smallest amount of blood can do the job.

Drugs also impair a person’s judgment and decision-making. Someone who is in the midst of a euphoric high is likely to lose their inhibitions and participate in dangerous activities, such as risky sex. Unprotected sex with someone that has been infected with HIV is yet another way that HIV can be transmitted. Furthermore, impaired judgment paired with an addict’s cravings and withdrawal symptoms can cause a person to willingly use contaminated needles even if they realize the danger of doing so.

Why is HIV/AIDS Dangerous?

Most people don’t realize that you don’t actually die from AIDS, but rather you die from opportunistic infections (OIs) because of the damage that HIV and AIDS do to your immune system. HIV significantly weakens your immune system, which leaves you vulnerable for other illnesses to attack. Common OIs include Kaposi’s sarcoma, Tuberculosis, and pneumonia. Your immune system can typically manage most infections, or it can at least manage them until medication can be given. However, a weakened immune system leaves the door wide open for these OIs and can lead to severe illness and death.

Cardiovascular disease (heart disease) is one of the deadliest chronic illnesses that can result from addiction. Heart disease is the damage or dysfunction of the heart or blood vessels. This damage inhibits the heart from performing normal functions, like pumping blood throughout the body. Alcoholism and drug abuse can both lead to heart disease.

Alcoholism can lead to heart disease in two major ways:

Many illicit drugs can negatively affect the heart, causing problems that range from abnormal heart rate to heart attack. Let’s look at cocaine as an example. Cocaine is known to increase blood pressure, stiffen arteries, and thicken the walls of the heart muscle. All of these effects can contribute to heart attack.

Dangers of this Disease:

Drugs and alcohol can cause many, many problems for abusers. But no other risk can really trump death.

Heart disease is the leading cause of death in the United States. It kills over 600,000 people in the U.S. every year.

There are many other chronic illnesses that can result from substance abuse. These are just a few. It’s important to remember that addiction is not the only thing you need to be wary of when consuming alcohol or using drugs. The list of co-occurring or resultant chronic illnesses is far from exhausted. So, yes, actions have consequences and addiction can – and probably will – lead to some kind of resultant chronic illness. But you have the power to change addiction’s claim on your life, thus changing its consequences.

If you or someone you know is struggling with addiction, we can help. Call our addiction staff at 855-737-7363 for a free and confidential screening.